This is a 4-photo series that I was able to take photos of the gorgeous sunset at Flat Rock Point in Palos Verdes Estate, California. I was quite reluctant to go down to the beach because the sky had been quite depressing. And I almost didn’t go. But, a what-if got into my head and the rest is history. It was one of the most gorgeous sunsets that I witnessed as far as I could remember. The colors were simply gorgeous, and I even felt some kind of out of body experience while feeling the red glow cast onto myself. It was hard to describe in words. 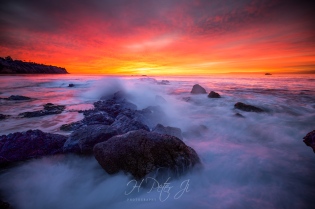 The last stretch of the blazing sunset glow reached as far as my eyes could see. Everything that my eyes landed on turned red and pink. It was one of those sunsets burning so intense that you could almost feel the heat from it. So surreal that you could see the potent glow cast on yourself, as if it was an out of body experience. And there I stood, frozen and captivated by the ethereal colors.

The sky was literally on fire! While with my eyes transfixed at the burning stratosphere, I couldn’t believe how intense it was getting by the minute. The ocean soon got completely imbued with the red and orange glow. I couldn’t tell where the horizon was. I hiked above the sea of clouds at sunset numerous times. But this was the first time where I wondered if this was what flying above the clouds at sunset would be like. 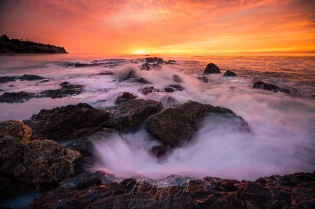 As the sun started sinking below the horizon, the entire cloud-clad sky started burning, like raging wildfires. It was lighting up the world like crazy. Mesmerized, my gaze was completely transfixed at the flaming stratosphere! Then, came the waves! My legs got completely awashed! And I was palpitating with a wave of elation!

The sky in the west didn’t look promising. Not one bit. Seriously, it was rather depressing. I didn’t feel like heading to the beach. I told myself that it would be a waste of time. And part of me just wanted to keep reading the book that I has been reading. But a what-if got into my head. I drove to Flat Rock Point in PV. The waves were crashing as high as my height. Then, that what-if actually started happening. The sun dropped below the thick blanket of clouds and started dispersing the orange glow over the far end of the ocean.